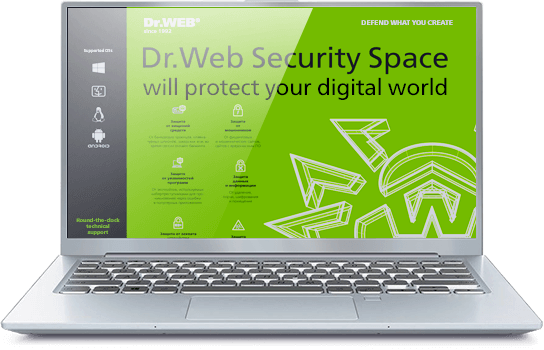 Buy licenses at a discount
up to 50% off

Dr.Web will protect your digital WORLD

All malware is created to commit crimes. What’s important to hackers is doing harm, causing damage, and the criminal earnings that result from those activities.

What threats does Dr.Web protect against?

With the help of social-engineering techniques, scammers deceive Internet users by playing on their curiosity, weaknesses, and carelessness. And Dr.Web protects users against scammers, using its entire array of anti-virus technologies.

Protection against the exploitation of program vulnerabilities

Just one example!
In May 2017, during a virus outbreak, WannaCry exploited vulnerabilities in the SMB v1-3 protocol. Dr.Web detected the Trojan as soon as systems came under attack even though it had not yet been added to the Dr.Web virus database. WannaCry was stopped by the Dr.Web heuristic analyser which has been perfected and upgraded since 1994. No Dr.Web user’s data was compromised.

Protection for data and information

Each of us values the fruits of our labours and our family photos and movies. But for hackers, such files are their key to getting rich.

Protection against device hijacking and spying

Dr.Web believes: A computer should serve its user rather than invisible intruders who can utilise the machine's resources remotely for their shady dealings. That’s why Dr.Web developers pay a lot of attention to providing protection against hijacking and spying.

Protection for children against psychological and moral harm

Children constitute a special group of Internet users that is most at risk due to inexperience, credulity, curiosity, and other age-related qualities. Therefore, the ways of protecting children on the Internet are special too.

Only if users do not lower their Dr.Web protection level (by disabling or suspending a module’s operation, lowering the protection level for the Preventive Protection component for short-term convenience, etc.).

Want to choose an anti-virus for your home PC?
It's easy!

Want to find an anti-virus for your office?
It's simple!

Want to protect your operating system?
It's easy!

Want to do this with a single key file?
It's simple!

Want to switch to a new operating system and keep the Dr.Web protection you’re used to? It's easy!

Want to use your previous key file to download the new anti-virus? It's simple!

Want to renew your Dr.Web license?
It's easy!

Want to do this at a discount starting from 40%?
It's simple!

Want to protect your mobile device?
It's easy!

Want to do it free of charge?
It's simple!

Want to transfer your license to a new PC or mobile device? It's easy!

Want to keep your previous serial number? It's simple!

Use Dr.Web – it's easy and simple!

Expand the license for up to 5 PCs or at a renewal discount.

Received in the loyality programme for purchases, с can be exchanged for discounts.