Anti-virus on
a subscription basis 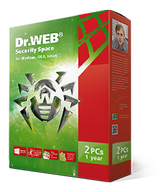 For IT professionals and students

For home For business

All Trojans do this:

Any sign that Trojan activity is underway is enough for Dr.Web to spot it and neutralise it.

This is possible due to various Dr.Web Preventive protection technologies that are designed to provide advanced protection. They analyse the behaviour of programs in real time and immediately neutralise harmful processes. Dr.Web can recognise suspicious programs that have similar behaviour patterns and block their operation. The Preventive protection technologies protect systems against new, highly prolific malicious programs that are capable of avoiding detection by traditional signature-based analysis and heuristic routines because they haven't yet been analysed in the anti-virus laboratory and, therefore, are unknown to Dr.Web at the moment of intrusion.

Here are just some of them:

Unlike traditional behavioural analysis, which relies on predefined rules describing the behaviour of legitimate programs that are well known to criminals, the intelligent Dr.Web Process Heuristic analyses the behaviour of each running program in real time by comparing it with the reputation information stored in the Dr.Web cloud which is constantly updated. It determines whether the program is dangerous and then takes whatever measures are necessary to neutralise the threat.

This data protection technology helps minimise losses resulting from the actions of unknown malware — and consumes very few of the protected system’s resources.

Dr.Web Process Heuristic monitors any attempts to modify the system:

Dr.Web Process Heuristic starts protecting a system during the boot-up phase, even before the traditional, signature-based anti-virus is loaded!

Dr.Web Process Heuristic works right out of the box, but the user can always configure rules based on their own needs!

The technology Dr.Web ShellGuard, which is incorporated into Dr.Web Script Heuristic, blocks routes into the system so that programs that exploit vulnerabilities can’t get in. Exploits are malicious objects, that take advantage of software flaws, including those not yet known to anyone except for the intruders who created the exploits (i.e., zero-day vulnerabilities). The vulnerabilities are used to gain control over a targeted application or the operating system.

The procedure is as follows:

Dr.Web Preventive protection technologies use only the predefined rules stored by the anti-virus locally as well as reputation data from Dr.Web Cloud which includes:

The cloud collects information about Dr.Web's operation on protected PCs, including data about brand-new threats. This enables Doctor Web to respond promptly to discovered defects and update rules stored on a computer locally.

Any files from the user's computer are not transmitted to Doctor Web's servers!